Museum of Chinese in America 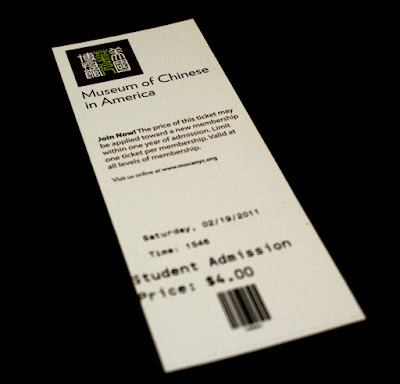 Now this is in English so @kixes can understand something. Hah!

Museum of Chinese in America is the very first museum in the United States that I visited. It is located in the Chinatown neighbourhood of New York.

The museum is not really big, and, to be honest, did not appeal to me that much, even though I am, technically speaking, a part of overseas Chinese community as well.

Still, I guess there is something I can blog about.

My US history knowledge is very limited, and it’s the first time I knew that there existed such a law like Chinese Exclusion Act. I know the US wasn’t that free nor that equal as it always brags about, still I didn’t expect it to be this explicit. This ill treatment to Chinese in the US is basically the main message of this museum.

Another interesting fact is about the change of Chinese stereotype in American public throughout the history. For most of the time since the influx of Chinese, the White American public viewed Chinese people very negatively, while the Japanese are more respected. This reversed during the World War II, when Japan became US enemy and China became its ally. Yet, the Chinese became the enemy again during the Cold War.

Throughout the museum there are many small plates nailed to the wall exhibiting successful Chinese Americans. Familiar faces are concentrated in the final room, where people like Ang Lee, Bruce Lee, Vera Wang, Yo-Yo Ma, Steven Chen, and Jerry Yang are shown.